ON REVOLUTIONARY BIRDS OF PREY: THE ALBUM

OUT TODAY VIA ATLANTIC RECORDS

Rising producer WHIPPED CREAM teams up with Baby Goth on new genre-bending track “So Thick”, and once again proves there are no boundaries when she creates. WHIPPED CREAM combines her signature drum and bass flare with trap and hip-hop influences, and paired with Baby Goth’s seductive vocals, has created an undeniable track that’s sure to be bumping through speakers worldwide.

“So Thick” is released alongside a track list of powerhouse women on BIRDS OF PREY: THE ALBUM (Atlantic Records), the companion soundtrack to the new film starring Margot Robbie as Harley Quinn. The album also features brand new tracks from Doja Cat, Megan Thee Stallion, Normani, and Halsey.

WHIPPED CREAM is the project of Caroline Cecil, who was once a competitive figure skater training for the Olympics, but after a debilitating accident on the ice and then a transformative experience at an Active Child show, she was led to channel her emotions through creating music… and the rest was history. Not only did Cecil just sign a deal with Big Beat Records, but she’s on the bill for Coachella (and several other major 2020 festivals). From being profiled in both Billboard and DJ Mag, chosen as one of Billboard Dance’s “Ones to Watch” and Mixmag’s “most exciting new names in bass music”, it’s clear that WHIPPED CREAM is making her mark on the music industry with no signs of slowing down. 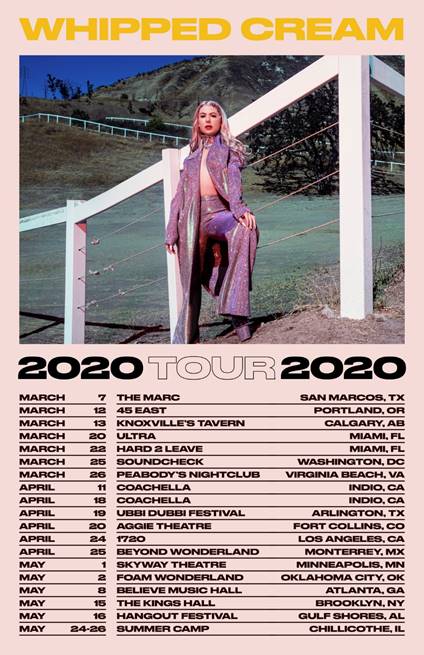