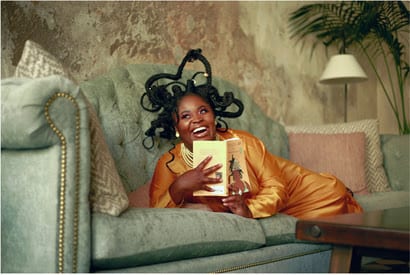 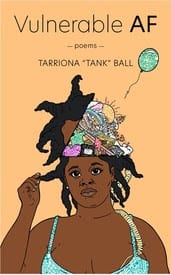 “I wrote this book without any thoughts of them ever seeing the light of day. I was sad, I was happy, I was vulnerable with myself and I wrote every single feeling down. So here it is, my first book of poems, Vulnerable AF,” says Ball.

In November 2020, Tank and The Bangas released their EP Friend Goals via Verve Forecast. The new music includes numerous musical contributions from artists such as CHIKA, Duckwrth and PJ Morton as well as a number of New Orleans-based creatives. Listen to/share Friend Goals HERE.

The EP follows the release of the band’s major label debut, Green Balloon, which arrived in 2019 to widespread critical praise including performances on “TODAY” and “The Tonight Show Starring Jimmy Fallon.”

Critical acclaim for Tank and The Bangas:

2017 Tiny Desk Contest Winners
“This band combines R&B with hip-hop’s poetry and rollercoaster storytelling, with a flair and alchemy that could only come from New Orleans.”

Press
“The moment you meet Tarriona ‘Tank’ Ball, it’s abundantly clear that the lead singer of Tank and the Bangas is just as unforgettable as her music. The 31-year-old radiates confidence in her melodic poetry as well as her rich and virtually flawless complexion.”

“10 Artists You Need To Know”
“A secular church experience, with freewheeling improvisational chops and positive vibes.”

“There’s no record quite like Green Balloon, and no band quite like Tank and the Bangas…They make music without boundary on instruments ranging from sax, flute, cello, vocal scratches, keyboards, synths, real drums, fake drums, a djembe and, of course, the poetry, philosophy, comedy and voice that is Tarriona ‘Tank’ Ball.”

“Bathing theatrical hip-hop, soul, funk, and spoken-word poetry in the lush musicality of its New Orleans home, the band’s recent album, Green Balloon, floats on the effervescent energy that captivated the Internet two years ago, and which only increases onstage. There’s no leaving a Tank and the Bangas performance in a bad mood.”

“Lead singer Tank has an elastic, surprising voice that oozes energy, turning simple lyrics into full stories just with a twist of the syllables; perhaps it shouldn’t be so unexpected, given her background as a slam poet.”

“Ball is as nimble a lyricist as she is a vocalist, with a malleable voice that’s powerful in its command. One moment she’s unpacking sinewy couplets and rhymes with fury and the next she’s wailing like she’s at a church revival.”

“The New Orleans collective came off as an unlikely Mothers of Invention-inspired soul revue, with lead singer Tarriona ‘Tank’ Ball’s mixture of little-girl and full-gospel vocal inflections putting her in a singular category altogether.”