OFFICIEL//ARTIFICIEL OUT APRIL 24 VIA VERVE FORECAST 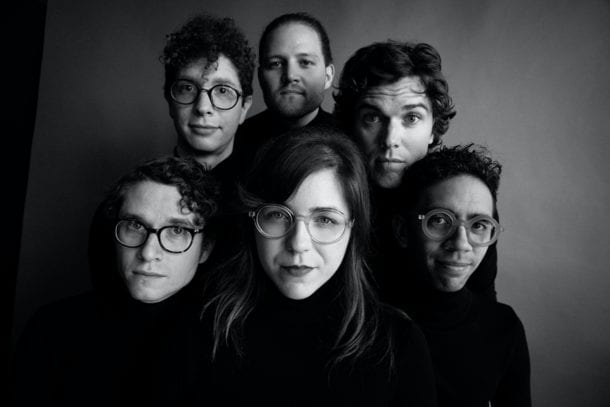 New Orleans-based group Sweet Crude’s video for their latest song, “Sun Sept” premieres on FLOOD Magazine, who call it “a cheerful NOLA dance collage.” The self-directed video features cameos from the band’s friends and collaborators, including Tank and the Bangas, Big Freedia, Michael Girardot of The Revivalists and Kam Franklin of The Suffers. Watch/share it here: https://VerveForecast.lnk.to/SunSeptID

Of the video, vocalist and violinist Sam Craft says, “‘Sun Sept’ is a slideshow of images from childhood. Growing up in the 90’s in New Orleans, we used to take advantage of ‘hurricane days’ when we’d have off of school and play outside in the crazy weather. The title is pronounced like ‘sunset,’ which makes a nerdy franglish pun because the song is in 7/4 time (‘Sept,’ which is pronounced ‘Set’ means ‘Seven’). Because the song is so wistful and bouncy, we wanted to make a video of some local musician buds dancing and singing along, which they graciously did in a sort of ‘TikTok’ way. We are really grateful for our community and are pumped to show off our awesome friends.”

The song appears on the band’s forthcoming record, Officiel//Artificiel, which is set for release on April 24 via VERVE Forecast. The album’s previously released lead single, “Déballez,” has already begun to receive critical praise—Billboard called it “[a] sparkling melody and Cajun-influenced groove.”

Officiel//Artificiel was recorded live at Esplanade Studios in New Orleans by Sonny DiPerri (Animal Collective, Portugal. The Man, Trent Reznor, My Bloody Valentine, DIIV). The record is the work of a band full of evolving skill, feelings and ideas. Trust and comfort born of such a long relationship emanates off the stage during Sweet Crude’s live shows and on this album, further showcasing that when everything comes together the product is more than the sum of the parts. “It’s never one sound, and there’s always all of us in every song,” keyboardist Jack Craft says. “And every song feels like it’s been some collaborative splatter painting,” he remarks.

Vocalist and drummer Alexis Marceaux furthers, “The whole record is about trying to find your authentic self. Stripping yourself down and realizing what other people and society tell you to be, and what you actually are. And each song tells that story in its own little way.”

In conjunction with the release, the band confirms a select run of tour dates, which includes stops at New York’s Mercury Lounge, DC’s The Soundry, Austin’s Mohawk Indoors, Boston’s Great Scott and more as well as performances at Bonnaroo, SXSW and New Orleans Jazz Festival. See below for a complete list of tour dates.

There are six musicians in the pop ensemble Sweet Crude, but their ultimate goal is duality. The lyrics are bilingual, with French and English lyrics sometimes sharing space in one song. The choice to write and sing in two languages came as members were still learning Louisiana French, the regional vernacular that was once commonly spoken in the Southern part of the state by descendants of antebellum immigrants. To the band, the sound of language itself is an instrument in its own right, one more tool in the creative arsenal.

The band’s debut EP Super Vilaine was released in 2013 and featured their breakout single, “Parlez-Nous à Boire,” which appeared in FX’s “American Horror Story.” The group followed up with the release of their first full length album, Créatures.