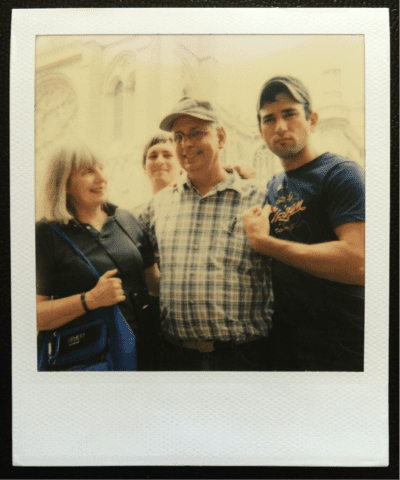 Oscar- and Grammy-nominated composer, vocalist and multi-instrumentalist Sufjan Stevens and Asthmatic Kitty Records cofounder, longtime collaborator and Stevens’ stepfather Lowell Brams will release a collaborative album, Aporia, on March 27. They share the first track from the album, “The Unlimited,” today. Listen and pre-order here, and stream a playlist of tracks that inspired the album, curated by Stevens, here.

Aporia signals a pivotal moment in Stevens and Brams’ relationship, which began in the early 1980s when Brams married Stevens’ late mother Carrie. Stevens and Brams maintained a strong relationship throughout Stevens’ adolescence and into adulthood, eventually founding Asthmatic Kitty Records together in 1999. In 2008, they collaborated on Music For Insomnia—a droning, heady collection of instrumental music referencing sleep aids and disturbances—as part of Asthmatic Kitty’s now-retired Library Catalog Music Series. In 2015, Asthmatic Kitty released Stevens’ 2015 LP Carrie & Lowell, which memorialized his late mother through the lens of her marriage to Brams.

Stevens and Brams recorded Aporia over the course of the last several years during Brams’ visits to Stevens’ home in New York. As opposed to the dissonant and niche approach of Music For Insomnia, Aporia finds the collaborators intently shaping a more palatable, New Age-inspired album. After tracking hours upon hours of music, the pair began isolating the best moments and piecing them together into songs. “You know how it is with jamming: ninety percent of it is absolutely horrible, but if you’re just lucky enough, ten percent is magic. I just kept pulling out these little magical moments,” Stevens says. With dozens of takes to sort through, Brams’ announcement of his retirement from Asthmatic Kitty provided the impetus for Stevens and Brams to create a finished product. With the help of several frequent Asthmatic Kitty collaborators, including Thomas Bartlett (Doveman), D.M. Stith, Nick Berry (Dots Will Echo), John Ringhofer (Half-handed Cloud) drummer and longtime collaborator James McAlister, keyboardist and trombonist Steve Moore (Sunn O)))), guitarist Yuuki Matthews (The Shins) and vocalist Cat Martino, Stevens and Brams put the finishing touches on Aporia.

Brams has been recording electronic and experimental music since 1986. He was born and grew up in West Alexandria and Dayton Ohio, graduating from Grand Valley State University in Michigan. Brams worked in retail and whole-sale bookselling until he co-founded Asthmatic Kitty Records with Stevens in 1998. In 1997 he made his debut in the Holland, Michigan band Con Los Dudes.

Stevens is a singer-songwriter currently living in New York. His preoccupation with epic concepts has motivated two state records (Michigan and Illinois), a collection of sacred and biblical songs (Seven Swans), an electronic album for the animals of the Chinese zodiac (Enjoy Your Rabbit), an expansive EP in homage to the Apocalypse (All Delighted People), a full length partly inspired by the outsider artist Royal Robertson (The Age of Adz) and two Christmas box sets (Songs for Christmas, vol. 1-5 and Silver & Gold, vol. 6-10). BAM has commissioned two works from Stevens, a programmatic tone poem for the Brooklyn-Queens Expressway (The BQE) and an instrumental accompaniment to slow-motion rodeo footage (Round-Up). Stevens’ Planetarium, a collaborative album with Nico Muhly, Bryce Dessner and James McAlister imbued with themes of the cosmos, was released in 2017 to widespread critical praise, and The Decalogue, Stevens’ acclaimed score for New York City Ballet Resident Choreographer Justin Peck’s ballet of the same name and the pair’s fifth collaboration, was released last year. Stevens was nominated for “Best Original Song” at the 2018 Academy Awards for “Mystery of Love,” one of three contributions to the soundtrack to Luca Guadagnino’s Call Me By Your Name, which also included Stevens’ “Futile Devices” and “Visions of Gideon.”