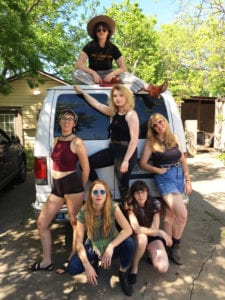 For the first time ever, Austin post-punk band Sailor Poon will join forces with a second drummer on a full kit – Bailey Chapman from Denton’s Pearl Earl, who played the festival in 2018. While many bands have performed with double drums, this could be the first time an all-female outfit has taken up the challenge.

The performance will take place Sunday, April 29 at 4:30pm on Fortress’ Seagram’s 7 stage. The band will be recording video and live audio to document the event, and will release a video of the performance later this year. Chapman will also be joining them for a special two-drum set in at Norman Music Festival the night before at 11pm on the Opolis inside stage.

Sailor Poon was born in a musty garage-slash-bedroom as a playful, sarcasm-fueled response to the big red Texas patriarchy. Blending saxophone and thrift-store keyboards with elements of bands like The Stooges, Black Sabbath and The Butthole Surfers, they became known for their noisy, chaotic, high-energy performances. They’ve shared stages with the likes of King Gizzard and the Lizard Wizard, Oh Sees, Ty Segall and more. November 2017 saw the release of their debut EP,  B-Sides and Rarities, and the band is set to release their debut full length album in early 2020.

For more information regarding Sailor Poon or to schedule an interview, please text or call Mariah Stevens-Ross at (512) 300-5651, or email sailorpoonband@gmail.com.