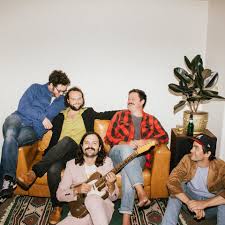 In celebration of the release, the band will continue their extensive headline tour this spring and summer with upcoming stops at Lexington’s The Burl, Nashville’s The Basement, Chicago’s Sleeping Village, Brooklyn’s Rough Trade, Washington, DC’s Songbyrd and Los Angeles’ Moroccan Lounge among several others. See below for complete details.

The release of Full Moon, Heavy Light follows a series of breakout years for the 5-piece band, who take their name from the small town of Ona, WV—just outside their home base of Huntington, WV. Since the release of their debut album, American Fiction, in 2016, Ona has received widespread acclaim, including coverage at NPR Music’s “Heavy Rotation,” who called their song, “Ides Of July,” “a debut single that knocks all else out of the water.” Additionally, No Depression praised, “It’s impossible to resist the deep, power-pop grooves on Ona’s debut album.” Since their formation, the band has built their following the old-fashioned way—through word of mouth and extensive touring. In addition to performing across the country with artists such as Childers, Blank Range and Blackfoot Gypsies, the band has also been featured on SiriusXM’s “The Loft” as well as an episode of the esteemed NPR program, Mountain Stage.

May 12—Columbus, OH—Ace of Cups