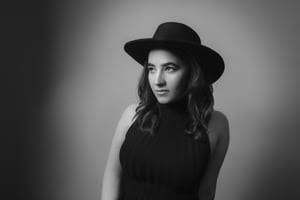 “a London-born composer, singer and guitarist with deep roots in rock music”
—The New York Times

“As DELANILA, Schwob creates experimental pop music with a heavy cinematic quality, blending her ear for a simple pop melody with the grandiose production and vision of her past as a composer for visual media and for concert music.”—mxdwn

“Schwob’s dark alter ego conjures comparisons to the Material Girl for her ability to create songs both seductive and muscular.”—Analogue

The music video for “The Philospher,” the new single by self-described cinematic experimental alternative project DELANILA, is out today and may be streamed and shared HERE. The video premiered at Clash, who called it a “crisp, seismic slice of pop-edged songwriting, but one that comes complete with a black, black heart.” Check out the premiere HERE and the audio single HERE. “The Philosopher” comes from DELANILA’s upcoming debut album Overloaded, set for release on April 3 on her own label, ZYG ZYG Records.

DELANILA is the project of multiple award-winning “notable cross-genre composer” (The New Yorker), performer and multimedia artist Danielle Eva Schwob, who has garnered international acclaim for her concert music, alt-rock songs and film scores. Of the single, Schwob notes, “‘The Philosopher’ is a blistering explosion of Internet-induced jealousy, inspired by the toxic underbelly of social media. I wrote it from the perspective of a troll, convinced of their own superiority and envious of the online successes of someone they consider undeserving. Its title is ironic. Because everyone on the Internet has an opinion and everyone is a philosopher.”

Previously released tracks from Overloaded include “Time Slips Away” (view video/share HERE) and “Turning On the TV,” (listen/share HERE). mxdwn calls the “Times Slips Away” video “a dramatically-choreographed clip that serves as the perfect vehicle to express the song’s theme of disconnection and isolation in our current digital age,” while Analogue praises the track as “a hypnotic, ghostly song whose musical mood matches the shadowy subject about which [Schwob] sings.” The video has also received numerous honors on the festival circuit, including Best Music Video wins at the Independent Shorts Awards and the Spotlight Film Awards, Semi-Finalist for Best Music Video at the Los Angeles Film Awards and Finalist for Best Music Video and Best Cinematography at the Indie X Festival.

Born in London and now dividing her time between Los Angeles and New York, Schwob has been called a “worldly musical chameleon” by Time Out New York, while The New York Times has praised her “hard-edged pop songs” and Consequence of Sound has called her music “dark and beautiful.” Her work has been featured by Lincoln Center, National Sawdust, BRIC Celebrate Brooklyn!, Chamber Music America, the Metropolitan Museum of Art, the MATA Festival and more, earning honors from The Aaron Copland Fund, New Music USA, The American Composers Forum, ASCAP, CMNY and BMI, among others. She was a Sundance Composers Lab Fellow, a Con Edison EtM Composer-in-Residence, an ACA Associate Artist in Residence and a MAP Fund Finalist. She has worked with artists including Jóhann Jóhannsson, Ben Folds, Tara Hugo & Philip Glass, Ido Zmishlany, The Pogues and David Simon, as well as on Darren Aronofsky’s mother!, Shakespeare in the Park, David Attenborough’s Conquest of the Skies, Manhattan Night and Indignation. Her work has been performed and/or recorded by artists including the American Modern Ensemble, PUBLIQuartet, Janus Trio, pianist Vicky Chow and cellist Michael Nicolas.