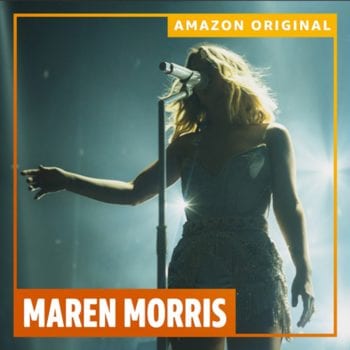 Grammy-winning artist Maren Morris unveils a new Amazon Original live EP Maren Morris Live From Chicago today only on Amazon Music—listen here and watch live videos for each track here. The EP was recorded at the inaugural show of her GIRL: The World Tour on March 9, 2019, which was livestreamed globally by Amazon Music. The footage features performances of “GIRL,” “A Song for Everything,” “Common” and “The Bones.”

“Feeling so nostalgic for shows lately so here’s a few tracks from opening night of GIRL: The World Tour,” Maren says.

In March, Maren received RIAA Gold certification for her critically lauded album GIRL, which shattered the record for the largest ever debut streaming week for a country album by a woman, with 23.96 million streams in its first week. In addition, Maren played her biggest show to date for more than 60,000 fans at the Houston Rodeo—watch her exclusive interview with Anthony Mason for CBS This Morning here—and she leads the 2020 ACM Awards nominations this year with five nods including Female Artist of the Year and Album of the Year for GIRL. At the time of its release, GIRL broke global records for most first day streams and on-demand voice requests with Alexa than any other country album debut on Amazon Music. Her latest single, “To Hell & Back,” was the second most-added at country radio upon impact, with 41 first week stations.

Her Platinum-certified “The Bones” is spending its eighth week at #1 on Billboard’s Hot Country Songs chart. When the song first earned #1 on the chart in February—which followed the chart-topping stint of “Girl” last summer—it marked the first time since 2016 that a solo country female artist had two #1’s from the same album. “The Bones” also achieved the longest post-peak run on the Country Aircheck/Mediabase radio chart in April, nine weeks following its second week at #1 in February, and was the first solo female back-to-back #1 since 2012. Additionally, “The Bones” reached the top 20 at Top 40 radio and #1 on the Billboard Adult Pop Songs and Mediabase Hot A.C. in April.

“the best as well as most important main-stream country-star album of the year.”—Variety

“A Texas songwriter with a sharp eye, a velvet voice and a mean streak…‘GIRL’
sets the bar high right away. It’s the most ambitious and eccentric song she’s done yet,
an emotional powerhouse driven by jagged rock guitar.”—Rolling Stone

“As effortlessly modern as she is steeped in heritage, Morris has shown us she
can do it all when she wants to.”—Los Angeles Times

“Morris represents a new generation of women in country who are working to transcend the boundaries of their Nashville roots.” —TIME

“The country singer has something to say about how her genre
handles women, skin and outspokenness.”—Playboy

“Country star Maren Morris is the strongest she’s ever been…now she’s testing the limits of just how far she can go.”—Women’s Health

Amazon Music listeners will be able to hear some of the tracks from the new Live EP on Fresh Country, a playlist featuring new releases across the genre. Customers will also be able to simply ask, “Alexa play Maren Morris Live From Chicago” in the Amazon Music app for iOS and Android and on Alexa-enabled devices. In addition to the Live EP, Amazon Music listeners can access hundreds of Amazon Originals featuring both emerging and established artists across numerous genres, available to stream and purchase only on Amazon Music