Urgent without being overbearing.” —The New York Times

“With the help of Colombian megastar J Balvin and Dominican dembow veteran El Alfa, the American EDM collective close out the summer with a bang.”—Rolling Stone

“‘Que Calor’ is a steamy banger”—Billboard 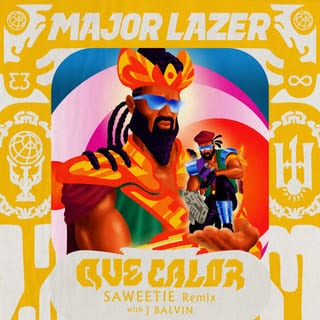 The 26-year-old California rapper broke onto the music scene just last year with her massive hits, “ICY GRL” and “My Type.” Along with her debut EP High Maintenance, Saweetie has garnered over 280 million Spotify artist streams to date and has collaborated with artists like Dua Lipa, Quavo, G-Eazy & Rich The Kid and now Major Lazer on this new remix.

The original version of “Que Calor” featuring J Balvin and El Alfa is currently climbing charts worldwide, and has been streamed more than 125 million times to date. The track has reached #1 on the Tropical Latin Radio and Latin Digital Song Sales charts, and garnered Gold certifications in Colombia and Spain.

Major Lazer is the global dance trio of Diplo, Walshy Fire and Ape Drums, named for the group’s fictional figurehead, a one-armed, Jamaican Zombie War commando embodying the group’s mission to free the universe with music. Major Lazer has released three acclaimed albums, 2009’s Guns Don’t Kill People…Lazers Do, 2013’s Free The Universe and 2015’s Peace Is The Mission, which features “Lean On” with DJ Snake and MØ. In recent months, Major Lazer has collaborated with Beyoncé on her companion album to The Lion King, topped charts with their Anitta collaboration “Make It Hot,” and are currently taking over worldwide with “Que Calor” featuring J Balvin and El Alfa. Major Lazer’s fourth album is imminent as they continue to fight for peace and freedom through music.

At the helm of Major Lazer is global superstar Diplo. As one of pop’s most in-demand producers, Diplo has worked with Beyoncé, Madonna, Robyn, M.I.A. and many more. Earlier this year Diplo unveiled a new country project, Thomas Wesley. To date, the project has launched three tracks: its debut, “So Long” featuring Cam, followed by “Heartless” featuring Morgan Wallen and, most recently “Lonely,” a collaboration with The Jonas Brothers that quickly caught the attention of fans and critics across the board. These are the first of several forthcoming collaborations due to appear on Diplo’s country EP.

Always putting out music in different forms, just last week Diplo and Born Dirty unveiled “Samba Sujo,” the first Diplo release on his new Higher Ground house label. Other recent releases include his deep house Higher Ground EP and the Europa EP for which Diplo hand selected a cast of rising European artists. This past year, Diplo also finds himself exercising his collaborative spirit with the psychedelic supergroup LSD with Sia and Labrinth, which has streamed over one billion times to date, and the Grammy winning house project Silk City with Mark Ronson.