LOOK WHO IT IS

“On the artist’s debut album, ‘Look Who It Is,’ the artist embodies years of lessons and love for an earnest, and reflective collection. Blending traditional Ska, with heavy elements from the third wave sector, and Latin influences, Maria Blues’ execution is graciously clean.” – Girl Underground Music

Album release shows to be held on Saturday, January 11 at The Concert Lounge in Riverside, CA and on Friday, January 24 at Catch One in Los Angeles, CA

Los Angeles, CA. (January 2019) – The Los Angeles-based, bilingual singer-songwriter Maria Blues released her debut album, Look Who It Is, on December 20, 2019 on all digital platforms. The album, a collection of nine energetic and sultry songs, features an eclectic fusion of styles, including reggae, ska, soul, and cumbia. Maria delivers carefully crafted songs with vocal prowess in English and Spanish, presenting a distinct approach to the new generation of ska and Latin alternative music coming out of Southern California.

Maria wrote, produced, and performed a variety of instruments on Looks Who It Is. She is also joined by a talented brass section and solid backing vocalists. The album’s single, “Rude Monkey”, was released in 2018 and was included in Angel City Records’ compilation Birth of the Fourth Wave of Ska, available on all digital platforms.

As a Latina, Maria views her music as a way to uplift those who usually do not have the chance to speak their voice, especially women.

“Most of the songs is what has been part of my life through teen years and even now,” explains Maria. “Some songs like ‘I Wish’ are dedicated to one of my closest friends that went through grief. ‘Alguien Mejor Que Yo’ is probably one of those songs that I can’t help but to feel emotional every time I sing it because a break-up or a heartbreak sucks. I try to stay true to myself and with that I hope to inspire other women to pursue their art.”

Maria Blues will be celebrating the release of Look Who It Is with album release shows on Saturday, January 11 at The Concert Lounge in Riverside, CA and on Friday, January 24 at Catch One in Los Angeles, CA.

“What a Crazy Night” – By Maria Blues

All songs written and produced by Maria Blues

Engineered by Juan Diaz, David Irish, and Carlos A. Mora.

Mixed and mastered by David Irish.

Tenor Saxophone on “What a Crazy Night” – Juan Lopez

Singer, songwriter, guitarist and drummer at heart, Maria Blues plays a fusion of ska, reggae and Latin American rhythms with a hint of soul. Her stage name comes from one of her favorite Manu Chao songs, “The Merry Blues”. In addition to Manu Chao, she also draws inspiration from Amy Winehouse, Juan Gabriel, Chavela Vargas, and Mon Laferte. Before diving into her own song-writing talents, she previously played drums with several LA ska bands. Maria is now taking her vocals to the stage with a backing band. Hailing from South LA, Maria Blues strives to bring her own unique sound to every show and to capture the hearts of all audiences. 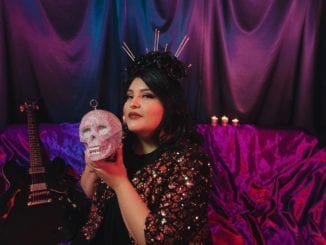