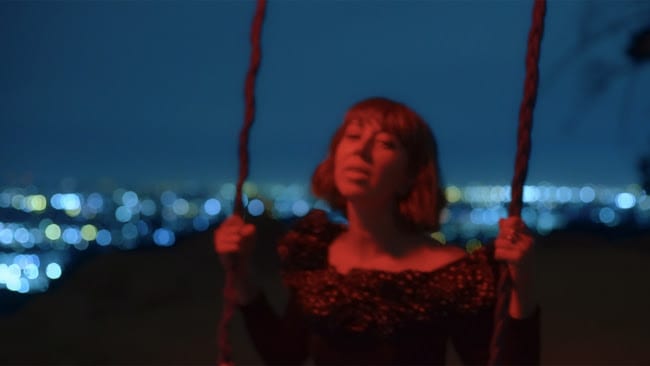 Vos was inspired to make the video for “Cellophane” by a swing she came across in Los Angeles’ Elysian Park that lifted her spirits when she was feeling down one day. “To me, ‘Cellophane’ swings in and out of sadness, regret and into vindication, peacefulness, clarity,” she says. “I like the innocence of the swing, like I’m holding on to something young and happy to help me get through this divorce; when it seems there would be no innocence left.”

In 2019, Vos released the Watch and Wait EP, a deeply personal exploration of her 2018 cancer diagnosis. The project received critical acclaim from The New York Times, Uproxx, who called it “cathartic and confessional,” Earmilk, who remarked, “[Vos] pours her life and soul into this latest, and it’s breathtaking,” and more. Vos, now feeling healthy and strong, went on to play a series of music festivals and embarked on a full headline tour and will be releasing new music imminently.

Acclaimed for her dreamy soundscapes and songwriting that explores modern women’s lives in their totality, Vos’ debut album Words I Never Said—an inquiry into the postpartum depression she experienced after the birth of her son—was praised by the likes of Rolling Stone, HuffPost, Nylon, Coveteur, Dujour, MILK and Earmilk. Vos has consistently sold out shows across North America. With more than 250 million streams to date, Ella Vos’ songs have soundtracked ABC’s “Grey’s Anatomy,” MTV’s “Catfish,” E!’s “Life of Kylie” and The CW’s “The Originals.”