OUT TODAY ON STEAM & VIVE PORT

The VR videos have been touring museums around the world as part of the Björk Digital exhibition , but now that it is possible to put them all out on an accessible gaming platform available to everyone , i am thrilled for people to be able to download them in their own home

we then filmed it on a 360 camera on a beach in iceland in november 2014 . we werent sure how to share it because of how few owned VR headsets . we started by putting a dozen of headsets in Rough trade record shops in brooklyn and bethnal green and got really good reactions . i then got offered to do an exhibition in sydney and by june 2016 we brought headsets there with “stonemilker” , “notget” and “mouth mantra” and then adding live performance of “quicksand” with AR for tokyo july 2016 . the exhibition then travelled to london , montreal and reykjavík in the autumn where we added “black lake” and “family” . it has also been to los angeles , mexico city , houston , barcelona , moscow , poznan , buenos aires , bogota and it is currently travelling between 4 cities in brazil

the whole process has been an improvisation , trying to keep faith in formats . it is too easy for musicians to turn pessimistic after cds have evaporated but i wanted to try to have courage to grow along with how 360 sound and vision tech was growing . with every challenge try to turn it into an additional gift for the ideology in the music . these 7 VR videos are done with 6 different companies , 4 softwares 6 different directors . early in this journey it became obvious that the process for great 360 sound mastering did not exist so we had to invent our own on the way …. there were dozens of other similar challenges ……

I am someone who absolutely loves music and gets so moved by the sensation of it . when andy proposed filming stonemilker on the beach it was perhaps him tapping into how spatial and connected to nature my songs are . i wrote that song , walking on the same beach and filming it in 360 and sharing it in surround sound seems the most natural way to invite my listeners humbly into my music .

the themes for the digital animations were a collaborations of mine with james merry and i would like to thank him for being my co-pilot for the visual art direction for this whole thing . he is so enormously talented and has had the patience to listen to my endless tales about the psychology and the sensation of healing through my most difficult album to write to date : my heartbreak album . it came to my surprise how metaphysical and “selfhelpy” heartbreak-healing really is . there is a reason why mankind has talked about broken hearts for aeons . you physically feel as a part of your body has fallen apart , has been torn off . there literally is a chestwound that is sown together and healed . when i first was watching VR in 2014 , the way i recognized it´s strengths and weaknesses seem to match the album i had in my hands perfectly . when you put the headset on , it is very isolating . heartbreak is . it also gives an escapist relief . which heartbreak needs . but there is also a hidden quality i personally think is going to be the most unexplored in the future , the healing potential  of VR . the amount of crying that was done into the headsets in sydney convinced me and james that we were on the right track , this was something people were experiencing on a visceral level .

biophilia was educational , made partially for music schools and the touchscreens/ipads were perfect for this

. when i first tried touchscreen in 2006 i felt i could finally share my 3d musicology . it offers opportunity to expand on the book , and things that are spatial and desperately need three dimensions in teaching like music

, physics , math and more benefit from this .

VR is different , i personally feel its biggest strength is how penetrative it is physically . it is not a coincidence  it was embraced by the porn industry . but the ways it can be very healing is for example in training damaged brain channels , neurology . and i feel it has extremely high potential for all things metaphysical , will probably excel in yoga , meditation , voice teaching , and all of the selfhelpy arts . because it is a very powerful extension of our body . if touch screen was our 3d book , this is our 3d body . our prosthetic aura we can fill with the air we want to be there …………

and all the directors to be up for this experiment , andy thomas huang , jesse kanda , nick thornton jones and warren du preez , inez & vinoodh, our japanese collaborators : dentsu and rhizomatiks . and stephen malinowski for his wonderful 3d notation animations

also mandy parnell and martin korth who pioneered our own take on the 360 mixing and mastering with me , solving and programming endless solutions

Chris Pike and Chris Elms were divine engineers on this

and also to protools and audiokinetic i hope you enjoy this ……

as always i am grateful for your interest warmthness

When fans put on a VR headset to experience Vulnicura VR, they will find themselves transported to a digital Icelandic landscape through which they will travel, experiencing all of the videos along the way. This journey will take them to a windswept beach for a one-on-one performance with Björk, through a subterranean lava tunnel, to a live augmented reality performance in Japan and even inside Björk’s mouth. The Vulnicura VR album is not a game, rather it is a house for the accompanying VR music videos and an exploration by Björk into the immersive audio world offered by VR.

As well as the VR music videos, each song on the album is also accompanied by a new 360º animated score by Stephen Malinowski. Previously only shown in 2D, these scores can now be experienced for the first time in full 360º – offering a unique immersion into Björk’s musical arrangements and a new synaesthetic way to experience musical notation.

Björk collaborated with a team comprising of both music and game experts to create a multi-channel, dynamically rendered, object-based audio soundtrack as experienced in a motion tracking VR headset, allowing audio levels and audio location and dynamics to change with the users different head positions and movements. This means that when an individual experiences the album through a VR headset, the sound in the headphones changes depending on what the listener is looking at or which direction they are looking in.

The first VR creation for the record was the 360-degree music video for the song “Stonemilker,” directed by Andrew Thomas Huang, in which the viewer is central to a performance by Björk on a deserted beach in Iceland. From here the experimentations escalated, from the Jesse Kanda-directed video for “Mouth Mantra”—putting the viewer inside Björk’s own mouth as she sings the track—to the Cannes Lions award-winning video for “Notget” in which directors Warren Thornton and Nick Du Preez Jones take the viewer to meet with a Björk who expands to gargantuan scale with the beat of a song. As Vulnicura’s VR experiences were created they were inserted into a touring exhibition, Björk Digital, which had over 300,000 visitors worldwide.

“ i am very excited for you to see the VR videos to vulnicura . it felt natural to footsoldier into the private circus that virtual reality is, with material like this : vulnicura is the first album of mine that insisted for the songs to be in certain chronological order , after they’d been written it became apparent that i’s unintentionally tapped into the narrative of a greek tragedy . VR is not only a natural continuity to the music video but has an even more intimate theatrical potential , ideal for this emotional journey . “ – Björk

The Vulnicura VR Album will be released on September 6th 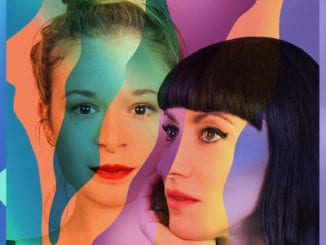