British duo AVAWAVES (formerly known as AVA) return with a new video and recording of their track “Voyager II,” off of this year’s debut release Waves, out February via One Little Independent (Björk, Poppy Ackroyd). Watch the video HERE, and listen to/share the track HERE.

While Waves (stream album HERE, download HERE), the duo’s first record, was written against a backdrop of a looming Brexit vote, their soon-to-be-announced forthcoming record was begun just before the global coronavirus pandemic struck and social distancing was widely instated.

The classically trained pair, Anna Phoebe and Aisling Brouwer, create ambient soundscapes based on intricate interplay between violin and piano. Both are composers in their own right—Brouwer for film and television, and Phoebe for the U.K.’s Royal Ballet School—but it is through AVAWAVES that the pair carve out their own musical identity in collaboration with each other.

Of the rerecorded single, Phoebe shares, “For me, ‘Voyager’ stands out on the album as being slightly different in mood to the rest of the album. It’s a constantly shifting tapestry of sound created by the strings, piano and electronics. This track really developed as we played it live on tour last year. As we travelled around the UK, we started writing new parts for it and changing the structure. The new version reflects the evolution of our production sound since releasing the album. It was so much fun to team up with the incredible DOP Rob Jarvis to produce the video, which represents how we connect and our energy during live performance, it reminds us of being on tour, which we can’t wait to get back to!”

No strangers to a constantly changing surrounding environment, their relationship to the violin- and piano-based pieces they composed together became one of emotional catharsis. Through AVAWAVES, they each found their musical counterpart.

“I’ve always toured and played live shows, so it feels very different to be confined to working on your own in the studio. I’m enjoying this time of intense focus,” says Phoebe of the current global crisis. “It’s been a time of artists and composers reaching out to one another and really cementing a feeling of community. Aisling and I had a week together in January writing tracks for our next AVAWAVES album, which has given us a strong basis to now work remotely together.”

“A lot has happened since the first album, and it’s changed and shaped the way we write and perform together—I am genuinely stoked for the next phase of our collaboration,” Brouwer concurs.

While the duo continues their work while social distancing, they look forward to announcing tour dates and putting forth their second album soon. Phoebe says, “When we play that’s when AVAWAVES becomes alive—it’s like a separate entity which is greater than the sum of its parts.” 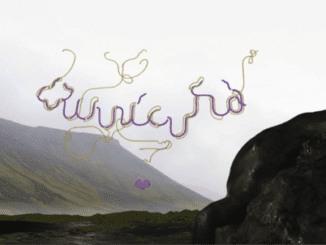